On March 10th, the School of Management and the USTC News Center co-hosted a press conference to formally announce that the School has received AACSB Accreditation, becoming the 10th business school in Mainland China to achieve this world-class recognition. The School is the first in the world to be accredited using the new AACSB accreditation standards that were published in 2013. 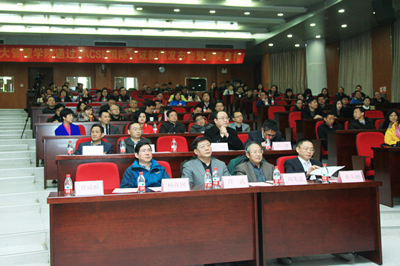 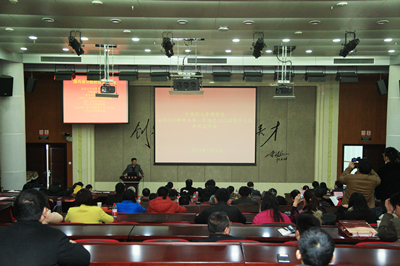 The formal declaration that “the University of Science and Technology of China has passed AACSB Accreditation” from AACSB Executive Vice President and Chief Accreditation Officer Robert D. Reid was announced in the conference. Since the AACSB International published new standards only recently (in 2013), the faculty and staff of the School as well as the university have made a big contribution to the promotion of the new accreditation. At present, USTC is the first and only school which has passed the 2013 Accreditation Standards. AACSB Accreditation represents the highest honor among business schools, and AACSB International expressed high appreciation for USTC’s contributions to management education.

The Association to Advance Collegiate Schools of Business (AACSB International) was founded in 1916 to accredit schools of business. Its current mission is to advance quality management education worldwide through accreditation, thought leadership and value-added services.  It is regarded as the benchmark for business school quality within the academic community. Less than 5% of business schools in the world have achieved the accreditation, and only nine in Mainland China were accredited before USTC.

During the International Conference and Annual Meeting (ICAM) in 2013, AACSB members unanimously approved the 2013 Business and Accounting Accreditation Standards (the standards were last evaluated and changed in 2003). The 2013 Standards ensure that business schools who achieve accreditation are best in class in how they meet the needs of their core stakeholders including students and employers. The Standards drive innovation, engagement and impact with students, employers and the communities they serve. Recognition of an Executive Development Program (EDP) was added to the scope of accreditation for the first time. The Blue Ribbon Committee on Accreditation Quality was charged with evaluating and recommending improvements to the accreditation standards, processes and infrastructure. After more than two years of study and collaboration with the global management education community and employer organizations, the new set of standards were finalized and then approved by nearly 700 of the best business schools from around the globe.

The School of Management at USTC joined as an AACSB member in 2008. It started its eligibility application in 2011 and received eligibility in January 2012. At the end of 2012, the School started the writing of its Standards Alignment Plan. After strict review and assessment, the School passed the accreditation due to its outstanding teaching and research combined with an appropriate and clear mission statement. It normally takes 5-7 years to achieve accreditation, but USTC skipped the implementation period and went directly from the Standards Alignment Plan to the Peer Review Team (PRT) on-site visit. In doing so, USTC set the record for the shortest time from SAP writing to PRT visit, using only 23 months.