Nobel Laureate, world-renowned economist, professor of The London School of Economics and Political Science, Christopher A. Pissarides and his group visited USTC in the afternoon on march 17, 2016.

Christopher was awarded USTC honorary professor by the vice-principal of USTC CHEN Shengchu. Christopher said he was grateful to accept the invitation from USTC and spoke highly of the scientific contribution did by USTC.

Sir Christopher addressed an outstanding speech about “China's Economic Prospects in Light of the One Belt One Road and Made in China 2025 Policy Initiatives” in the same afternoon. The excellent introduction and ideas with beautiful professional graphs gave the audience great pleasure.

Sir Christopher A. Pissarides’ speech appealed to hundreds of listeners, including USTC students and faculty staff, while lots of international exchange students came to the speech as well. “For I have been the honorary professor, I’m glad to give you a lecture as your professor”, said Pissarides. 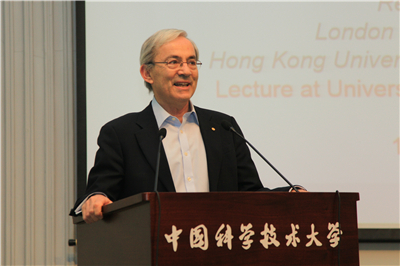 Pissarides mainly concerned four topics in his speech: Labour allocations and productivity growth, Industrial policy, the need to facilitate further structural change and rebalance the economy and new policy initiatives: One belt One Road and Made in China 2025. In his speech, he retrieved the development record of China, admiring the miracle as well as pointing out that there’s a long way to go due to relatively low productivity. A significant difference still exists in labour productivity and employment shares when compared to United States and European countries. He found it necessary to encourage urbanization and the growth of private sector firms. He also recommended that R&D (Research and Development) be the essential part for China to improve.

As for the “One Belt One Road” policy,Pissarides introduced the main idea of it and put forward several points of pros and cons to consider. But as a whole, he believed the policy would be beneficial to China’s ambitious dreams. After the speech, Pissarides answered a few questions from audience about the global crisis, artificial intelligence, environmental problem and so on.

Pissarides' talk is full of serious deduction but never devoid of intelligent humor. He showed us an outstanding wisdom of an economist to see and understand China, which is to improve our understanding of our social life.

Christopher A. Pissarides is a world-renowned economist who is also the professor of The London School of Economics and Political Science. In 2010, he was awarded the Nobel Prize in economics, jointly with Peter A. Diamond and Dale Mortensen, for his contributions to the theory of search frictions and macroeconomics. Pissarides is mostly known for his contributions to the search and matching theory for studying the interactions between the labour market and the macro economy. He helped develop the concept of the matching function (explaining the flows from unemployment to employment at a given moment of time), and pioneered the empirical work on its estimation. Pissarides has also done research on structural change and growth.